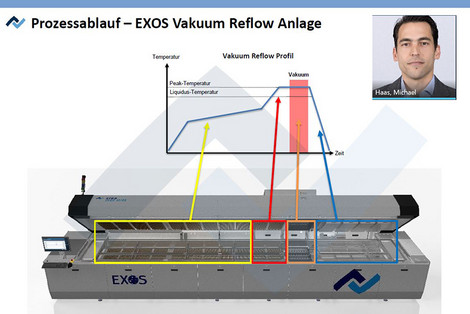 Wertheim, 16.06.2020
For the webinar “Challenges: Reflow and Vacuum Process” Ersa had to set two dates in order to be able to directly serve the customer´s interest. Michael Haas, Product Manager Reflow at Ersa, was thus able to welcome 40 participants to the one-hour online presentation. The central topics were the vacuum process and the associated challenges in the reflow soldering process as well as influences on the result, such as avoiding voiding and the complexity of the process.

Michael Haas also sketched an optimal reflow target profile consisting of the zones preheating, peak and cooling – important control variables here are process parameters such as temperature profile, volume convection, transport speed for high throughput, cooling, process gas and center support in order to avoid bending of the PCB. The ultimate goal is to achieve the smallest possible ΔT across the entire assembly. For this purpose, the use of a suitable measuring system is recommended, which traces the flow in the reflow process and measures the solder heat requirement at solder joints and the component heat resistance at the component housing.

In a further block of topics, the Ersa reflow expert explained how to achieve clean soldering results, for example to achieve compliance with international standards such as IPC-A-610. Common defect patterns such as solder beads, bridging, an incompletely melted solder depot and voids (inclusion of air, gas or flux residues in the solder joint) were clearly explained.
Voids in particular can have a negative effect on the solder joint, for example by reducing electrical conductivity and heat transfer between the component and the circuit board as well as by changing the impedance in high-frequency applications. Voids are formed in 20% of cases in the reflow and SMD process, 40% on the PCB and components and a further 40% on the solder paste. The void rate can be reduced to an absolute minimum by using an EXOS reflow soldering system with integrated vacuum chamber. This is an optimal process for today´s reflow processes, in which double-sided assemblies often have to be processed. Finally, detailed questions about the advantages of the vacuum cell were answered.